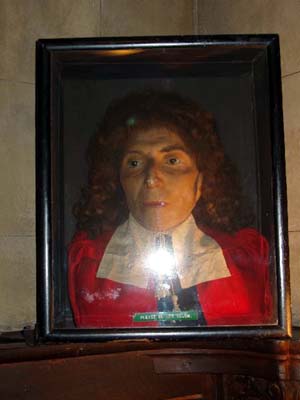 Sir William Turner The photograph is a bust of Sir William who was responsible for the building of the Alms Houses which was originally built as a hospital in 1676. The hospital was constructed around a rectangular courtyard, open on the north side. It provided hospitality for the poor in the form of cottages for ten men on the west side and ten women on the east side. To be eligible for entry they had to be aged sixty three years or over. In the wings flanking the chapel on the south side and in the short wings at the north end lived ten poor boys and ten poor girls, often orphans or from one-parent backgrounds. Here they were raised and educated to later serve as servants to the gentry or put to apprenticeships at the age of 16. One entry in the old records reads : "William Jourdison died August 17th 1759 of a Mortification in his Leg, he lived for three days after his foot fell off, and though in his perfect senses never found out the loss of it, till an hour before his Death, when he was told of the defect by those who attended him. He wanted a few weeks of 90 years of age". There is a chapel attached to the Alms Houses which is still in use today for religious services and also concerts of classical music and choirs. The Alms Houses have been changed to flats for ladies and for couples now and have undergone a big refit recently to bring them up to a modern standard but without spoiling the outer appearance of the site. 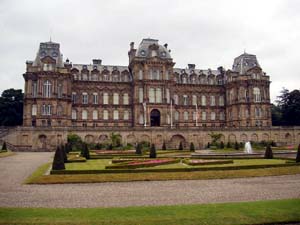 Bowes Museum Bowes Museum is situated on the outskirts of Barnard Castle. The Bowes family were involved in the building and was designed right from the start as a museum and the building is based on a French chateau design and a lot of the artefacts contained within are of French origin. Inside the museum is one of the finest art collections in Britain, featuring paintings, furniture, porcelain, tapestries, jewellery and dolls. It is quite famous for the silver swan which runs on clockwork and is only shown working a few times a day, when it moves its neck and picks a small silver fish in its beak and swallows it. 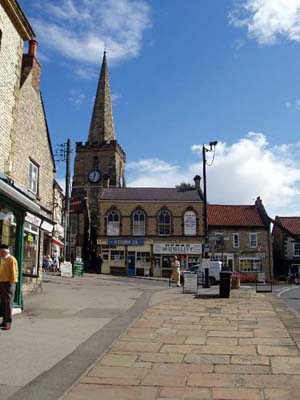 Pickchurch - Saint Peter & Saint Paul Parish Church Pickchurch is, as you guessed, at Pickering. The church is called Saint Peter & Saint Paul Parish Church. Parts of the church date from before 1200 A.D. The stone spire was added about the 14th century. It is famous for its medieval wall paintings featuring the saints and Saint George and the dragon were probably commissioned about 1450 and painted in the ten years after that. The paintings had been covered by a white lime wash from about 1550 as part of the general process of the Protestant Reformation and were accidentally rediscovered in 1852 during restoration when a thick coat of plaster was removed from the nave. They were subsequently covered again by a heavy coat of whitewash because the vicar thought they were a distraction from his sermons. A later vicar to remove the whitewash in 1876 and restore them to their former splendour. Pickering town is also at the end of the North Yorkshire Moors Railway line - scenes were shot here for the "Harry Potter" films.